Peace Fur Paws is dedicated to working with dog rescue groups to help with their rescue and rehoming surrendered, abandoned, homeless and rescued dogs.

Adopt a Dog From Thailand Today!  Soi Dog Foundation is a not-for-profit, legally 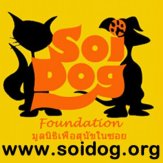 registered charitable organization in Thailand, the United States, Australia, the UK, France and Holland. Soi Dog helps the homeless, neglected and abused dogs and cats of Thailand, works to end the dog meat trade throughout the region, and responds to animal welfare disasters and emergencies. We aim to set an example for the Asian region on how to humanely reduce the number of unwanted dogs and cats through spaying and neutering, and to better the lives and living conditions of the stray dogs and feral cats of Asia.

Kamari is a four year old dog who spent most of his life on the streets of Thailand and came to Soi Dog’s shelter because someone threatened to kill him. While he is safe at Soi Dog, he doesn’t play much with the other dogs in his run. However, this big teddy bear loves people and especially loves to cuddle, and he would be delighted to live in a home of his own. Click here to get to know Kamari

Mavis is a three year old survivor of the cruel dog meat trade – she was rescued from a tiny cage in a truck heading to a slaughterhouse. Mavis is friendly, sweet, and loves to jump up to say hello. She enjoys pats and affection and she would be delighted to have a family of her own. Click here to read more about Mavis

Lutzy was rescued from a construction site when she

was one month old. Her mother had been poisoned and she would have died if a compassionate person hadn’t found her hidden in the debris. She is now a lovely, friendly one-year-old girl who is struggling to fit in with the many other dogs at the shelter. Lutzy loves going for walks and having cuddles and will be delighted to live with people. Click here to learn more about Lutzy

Soi Dog can send animals to almost every major airport in the world. We don’t charge adoption fees, but they do need adopters to pay the necessary expenses of sending their new best friend to them. If you contact me or fill out our adoption questionnaire in the next three days, Soi Dog will reply within two days. Provided the animal travels with a flight volunteer (not as cargo, which is more expensive) and the adoption is confirmed within a week, including signing an adoption agreement and donating a deposit of $200, 200 euros, or 200 pounds, you will receive a discount of 25% off the costs. This is not in addition to any other discounts.

Devastation Ravages Australia From Bushfires and Over One Billion Animal Casualties

Dark Ties of The Meat Industry

Canadian Wolves Are Under Attack

Vote to Save the Climate this Federal Election! Join the Global Climate Strike Sept. 20th-27th