Not only is milk production cruel, it does not make your bones stronger.

Milk is known to be a fluid of nurture and love, and it is produced by a mother for their newborn baby to help them with their growth. Breastfeeding creates an intricate bond between a mother and it’s child but in the dairy industry, mothers and babies are exploited and treated in unimaginably cruel ways just so “human adults” can get their milk. Milk is full of growth hormones, fat, sugar and other substances that are necessary during the first year of a baby’s life to help them thrive. Why is then, that adult humans are taught to drink milk? Humans are the ONLY species to consume other animals’ milk past infancy.

This is the result of false marketing. We have grown up being taught that milk is good for us and with the notion that drinking milk is a great source of calcium that will make our bones strong. The Canadian Food Guide taught to us in school was created by the dairy industry and is biased and misleading. Sadly, we have all been deceived to believe that dairy is good for us when in fact, there are thousands of studies showing the adverse effects of dairy to our health. Dairy is also an unbelievably cruel industry and environmentally damaging. So, let’s break it down.

Myth #1: Cow’s milk is a great source of calcium – FALSE!

Although cow’s milk has a lot of calcium, numerous studies have shown it is poorly absorbed and utilized in the human gut. Cow’s milk is now also one of the leading sources of allergies and that’s because humans were never meant to drink another animals’ milk! The proteins found in animal milks often cause inflammation to our system, which makes the calcium even less absorbable. If you are looking for foods with absorbable calcium, then try some of these food options:

Cow’s milk can actually have an adverse effect on your bones. Although milk is rich in calcium, the calcium is poorly absorbed and its inflammatory effects on the body can diminishes calcium stores in your bones.

Dairy products can actually increase your risk of many types of diseases and cancers. The news about the adverse effects of dairy are often not widely publicized because the dairy industry has such strong lobbying powers.  Consuming dairy products has been shown in hundreds of studies to be linked to an increased risk in:

Cows are treated terribly on dairy farms. They are often kept in small spaces with not enough room to move. The sad truth is that they are used and abused.

Did you know that baby calves are taken away from their mother shortly after birth and fed other substitutes? Cows are very empathetic. Similar to a human mother and new born, cows develop a bond with their baby. They too express grief when suffer a loss.

Did you know that male cows are often killed or sent to slaughterhouses when they are only days old because there is no use for them?

Animals have been shown to be sentient beings and they experience stress and emotions just like human beings. Many dairy cows are ridden with disease and health problems associated with their abuse and poor treatment. It has been well documented that animals are aware of their suffering and cows cry and shed tears when they are distressed.

In fact, cows only produce milk when they are expecting. They produce milk to feed their babies just like humans. To continue milk production, these farms often impregnate the cows through artificial insemination using a device called a rape-rack. Shortly after they have given birth their baby is torn away from them. This process is extremely traumatic for the cows, not only due to the grief they experience from having their babies taken away from them but also being impregnated repeatedly. When these cows are finally spent and their milk production declines due to their abuse, they are sent for slaughter. It is a life of complete misery for these poor creatures. 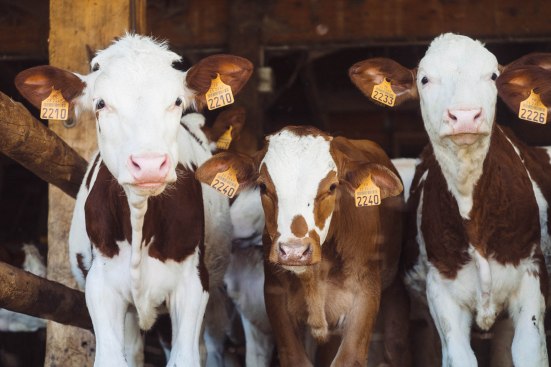 What do humans, baby calves, and many other mammals have in common? We all drink milk when we are born. The difference though, cows and other mammals stop drinking milk after a certain period of time. Which begs the question, why do humans continue to? This is due to false marketing and the instilled belief that we need milk past infancy which is simply not true and unnecessary. Drinking another animal’s milk has been shown to increase the risk of many diseases.

Let these myths be an eye opener to what goes on behind the scenes. You can easily stop supporting this by stopping your dairy consumption and choosing a plant-based milk.

To learn more, you can read the following articles: