Toronto is becoming a huge vegan hotspot for vegan eats! Here are some of our favorite places and they are places you definitely want to check out even if you are not vegan or vegetarian!

This little restaurant near Yorkdale Mall is known for their exquisite vegan brunches, and its the only place we have seen an “egg benedict” with a runny yolk! They do a fantastic job recreating some of our favorite brunch items including french toast and omelettes! They serve brunch every Saturday and Sunday from 10-4pm.

You may have thought turning vegan or vegetarian may mean no more sushi for you, well don’t worry veg lovers, Tenon is the place to go! They are ranked one of the top restaurants for veg sushi and many Japanese/Chinese dishes. Their menu is expansive and they have a large selection of some of the most popular dishes including “chicken” teriyaki, crispy “duck” and “beef” udon soup. An excellent spot if you are looking for comfort, Asian food.

One of the things I really missed after going vegan was high tea/afternoon tea with moist, rich scones and creme fraiche, yummy cupcakes and mini sandwiches. When I heard about Sorelle and Co. opening up in Vaughan, I felt my heart leap with joy and I booked my high tea right away. Not only are all their items vegan, they are also nut free, soy free, gluten free and sesame free. I was blown away by the huge assortment of cookies, cupcakes, cakes, tarts, breads and salads. The decor is beautiful and very comfortable. The high tea portions are generous and between two people, I think we were only able to eat about half of what was given to us. If you like pastries, you gotta check this place out.

Yum yum yum! This small little tiny restaurant in Scarborough is a vegan takeout and juice bar serving Rastafarian dishes. Ital Vital reported “We don’t believe in killing or hurting things in the world, so that’s why we are vegan,” Freeman explains. “We believe in one love.” The food is hearty, delicious, healthy and incredibly flavorful. You usually get rice and peas, non-GMO barbecue soy and chow mein plus a choice of stews made from things like Caribbean pumpkins, callaloo (a leafy green), chickpeas, okra, zucchini, butter beans and bok choy.

Fresh currently has 4 locations in Toronto and they offer a full line of raw, organic cold pressed juice, and a traditional made-to-order gourmet juice bar. They also serve brunch and lots of fresh bowls. Portions are big and the food is nutrient-dense and highly satisfying. All their food is made daily, in-house, from whole, natural ingredients and most menu items are vegan.

Located in St. Catherines, Beechwood Donuts has to be one of the best vegan donut establishments I have been to. Being a huge fan of donuts, I was having a hard time finding a good donut after going vegan. Here, you will not be able to tell these donuts are vegan. Every donut I tried were amazing and they have some very unique flavors including Strawberry Keylime, S’Mores, French Toast, Coconut Cream and more!

A wonderful Vietnamese restaurant serving only vegetarian and vegan foods. Their pho is delicious and their broth is very tasty. They have a full menu of an large assortment of Vietnamese and Chinese foods. Located in Kensington Market, this is the place to go if you are craving a large, hot bowl of soup noodles.

Bhai’s Indian Canteen is a great place for vegetarians and vegans alike to eat authentic Indian cuisine. The atmosphere of the restaurant is rustic and earthy. We tried the vegetable uthappam and masala dosa, which were both tasty and flavourful (and vegan), but the portions were a bit small. We recommend adding some plain naan bread to complete the meal. Overall, we would stop by Bhai’s again, since they are vegan friendly and offer some delicious Indian dishes.

Offering coffee, breakfast, lunch and dinner, this new establishment in Vaughan serves vegan and non-vegan foods and 90% of their menu stays true to the original menu in Israel. All their breads are freshly made and their vegan soy souvlaki and “beef” stew was delicious. 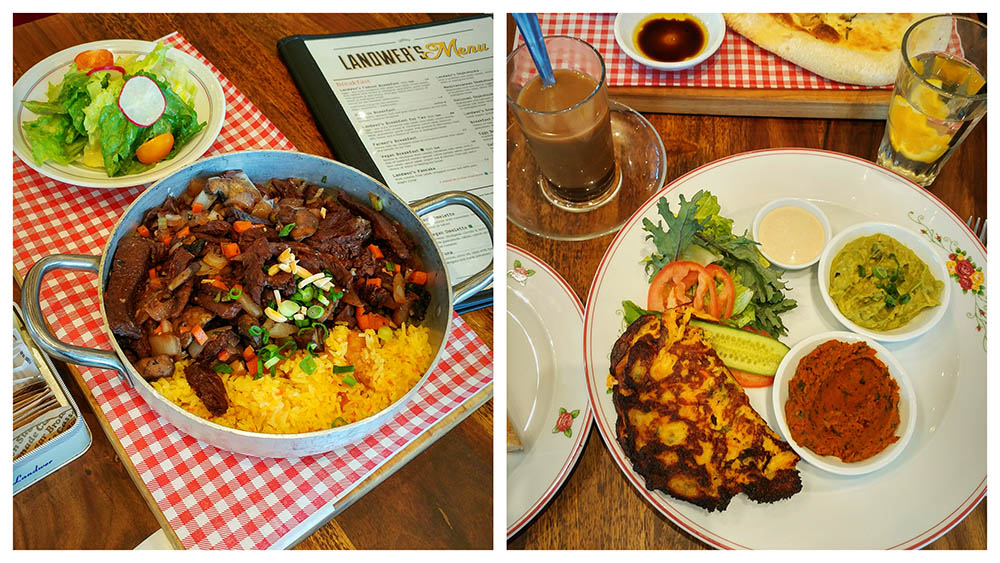 The Buddhist community is well-known for their emphasis on compassion and reducing suffering of all beings. Many Buddhist temples in Toronto serve vegan/vegetarian food especially during special occasions and anyone in the public can go. For thousands of years, Buddhists have cultivated their cuisine to help people to reduce their meat consumption. Once a year, at Fo Guang Shan Temple hold their annual summer Vegetarian Festival with over 100 veg dishes served. This year when I went, I couldn’t believe the enormity of the event. There were dishes from every Asian cuisine including Cantonese, Northern China, Malaysian, Thai, Indian, and Vietnamese dishes. The longest lineup was for vegan roast “pork” which I never thought was possible! It was so scrumptious and popular, but the line up was definitely worth the wait. The culinary skills shown at this festival were top-notch and it will surely be an event that I will return to every year.

This quiet little restaurant is nestled inside of a busy plaza at Market Village and it has been around for many years. I haven’t been there in a long time so I decided to pay them a visit recently and I was so impressed by the quality of the food! Their dishes seem new and improved and their dimsum and dinner dishes were very well done! The dishes are more upscale and it’s a bit pricey but it’s worth the extra bucks in my option.  They have successfully remade famous Chinese dishes such as veg abalone, Kung Pao “chicken”, veg “spareribs” and more!

Not a vegetarian or vegan restaurant but I have to commend Bier Market for their Cauliflower Steak dish which is 100% vegan. From the cauliflower puree to the quinoa and roasted cauliflower, this dish is so good and so filling. They don’t have many more vegan options but I hope they do expand their line of veg-friendly dishes!