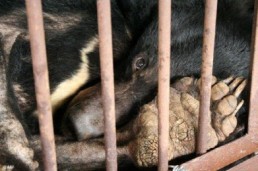 After months of international pressure to rescue these bears from a bear bile farm, it has been announced that the Halong Bay bears can be rescued by Animals Asia!  The action is a direct result of the Save the Halong Bay Bears campaign which resulted in over 115,000 signatures from animal lovers globally. They were joined by celebrities such as Judi Dench, Olivia Newton John, Stephen Fry and Ali MacGraw. A letter from 12 Embassies added further pressure on the authorities. In addition, the local authorities of Vietnam’s Quang Ninh government have agreed to COMPLETELY END bear bile farming in the province by transferring all of the remaining 38 bears to Animals Asia’s Vietnam Bear Rescue Centre. This is an immense success for the bears!  Visit Animals Asia for the whole story!

Saving these bears will require an immense amount of resources, and we need more help than ever. Learn how you can help these bears and supporting the end of bear bile farming.